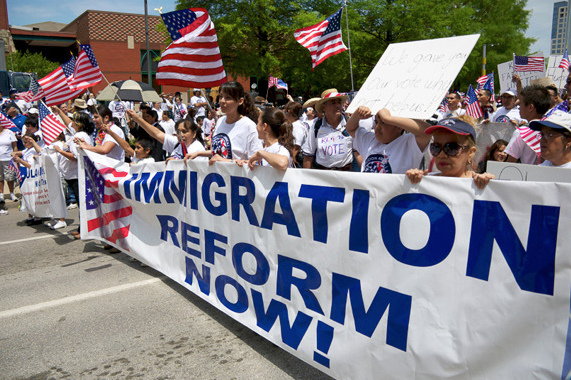 Immigration Reform is Needed Urgently The prospect of an immigration reform bill has come as a welcome glimmer of hope for millions of would-be immigrants to the United States. The bill will not only assist those millions of undocumented persons who have no other form of immigration, but also those who are stuck in a priority …

America is witnessing a new phase in the U. S.  immigration world:  state laws which allow local enforcement to act as federal agents and directly enforce federal   immigration laws.  Many debates are emerging as to why states like Alabama should enact these types of laws.  Those in favor claim it is simply to preserve jobs …

If you are a Lawful Permanent Resident (green card holder), have a criminal record (no matter how old or how minor), and plan to travel outside of the United States, you need to consult with an immigration attorney to advise you.  There is a possibility that you may be denied re-entry simply because of your …

In an August 2011 press release, representatives of the U.S. Department of Homeland Security announced initiatives that would promote start-up enterprises and create jobs in the U.S. This was going to be done through a program called Start-Up America, an initiative to promote entrepreneurship in the country. It was started six years ago, but only now seems to be taking the spotlight against the backdrop of increasing unemployment figures and lowered GDP figures.

Once an individual is in the custody of Immigration and Custom Enforcement, commonly known as ICE, they do not know what to do. Although ICE has rules and regulations to monitor their procedures, there are stories of ICE officers unduly pressuring individuals to sign their departure from the United States. This article will outline the benefits of appearing before the Immigration Judge rather than signing your departure and how a protection letter may ensure you get your day before the Judge. This may save your life because, as everyone knows, you will leave your children, spouse, and a job behind. Above all, it may save you from returning to a violent environment in your homeland.

Unfamiliarity with the law can be the biggest downfall for those individuals who are undocumented. For example, it is a common misconception that people have the right to apply for their green card based on the fact that they have lived in the United States for 10 years. Unfortunately, there is no such law in existence today that allows for someone to obtain legal status based on that fact alone.

The only time that the physical presence is important is when an individual is already in removal proceedings, i.e. deportation, and is applying for the relief of cancellation of removal.

In December of last year, the media reported on a U.S. soldier on active duty whose wife and son were barred from returning to the United States when they went to their interview for permanent residence outside of the United States. Like many people, his wife was brought to the U.S. at infancy, by her …

Veronica was petitioned by Joseph, a U.S. citizen, who obtained an interview for her lawful permanent residence. The interview, however, was scheduled at the U.S. Consulate in Ciudad Juarez, across the border from El Paso, which required that Joseph be present. Herein lay the conundrum. Joseph could not travel to Mexico although both were required to attend the interview. His enlisted status forbade him from traveling to Mexico or to any other foreign country for this purpose.