By Margaret Donnelly - Attorney on August 15, 2011 in Blog, english 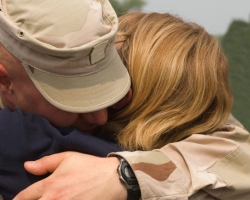 It is not only our enlisted men and women who would benefit from Congress allowing a change of venue for persons who have an immediately available visa to apply for their permanent residence while in the United States. Such a law would greatly assist families throughout the United States to achieve family unity and security without leaving the country.

The largest percentage of immigration to the United States is from Mexico. Thousands are the beneficiaries of approved labor or family-based petitions for permanent residence. When a visa becomes available and they obtain an interview for lawful permanent residence, the interview is scheduled in the border town of Ciudad Juarez in Mexico. Often, due to them having some years of unlawful presence in the United States, they are barred from re-entering the United States, separating them from loved ones who remain behind, including young children and spouses, many of whom are United States citizens. Many of these spouses are active members of our armed forces who, by law, are prohibited from traveling to Mexico.

Thus begins the saga of families who are separated by these circumstances. For such undocumented spouses and children, the need to travel to Ciudad Juarez for the interview is dangerous. Ciudad Juarez is the epicenter of drug trafficking organization activity with widely published killings together with horrific graphics, in magazines such as Time Magazine. The U.S. Department of State has warned against any unnecessary travel there. The violence is perpetrated against citizens of Mexico also. U.S. spouses are quite rightly afraid for their spouses who have to travel to Mexico for interviews, and who are barred from re-entry into the U.S. In some cases, in order to preserve family unity, and in the interest of minor children who still require the influence of the barred parent, U.S. citizen children are moved to Mexico in order to be with their barred parent. This places the child in extreme peril of getting caught in the cross-fire of drug wars and subsequent recruitment into cartels. The D.T.O. violence and activity is widespread and not limited to one location in Mexico. The Department of State, in its last travel advisory, highlighted that the states of Tamaulipas, Michoacán, Sonora, Chihuahua, Coahuila, Sinaloa, Durango, Zacatecas, San Luis Potosi and Jalisco are especially dangerous.

The separation of predominantly U.S. citizen young children from their undocumented parents is not in the best interest of the United States. Inability of one parent to adjust whilst in the U.S. and often subsequent barring from the country leads to single parent homes. Studies have shown that children from single parent homes generally live below the poverty line. This economic disadvantage is associated with poor academic performance and behavior problems. A recurrent theme with juvenile delinquents and offenders is their coming from single parent homes. It is in the best interest of the U.S. if family units can stay together for the sake of U.S. citizen children. It will assist in raising the level of education in the country and greatly reduce the number of offenders. Lower crimes rates have been associated with greater country prosperity.

A change in venue for the undocumented family members of U.S. citizens and permanent residents to apply for adjustment of status and allowing them to pay a penalty fee is only in the interest of the United States. It ensures family stability for U.S. citizens, particularly for U.S. enlisted personnel. Such family stability and security is not isolated. Its positive effects will trickle into the economy and national security of the country.

HELP OUR ENLISTED MEN AND WOMEN REUNITE THEIR FAMILIES, PART 1
The Myth of the 10-Year Presence