I was surprised when I found out that you voted against the DREAM ACT.

I don’t know the reasons why you voted against it.  I will never presume to know.

All I know is that I voted for you as a candidate for the position of President of the United States. 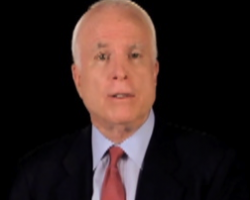 All I know is that, as a Hispanic-American, you deserved it.  You deserved it because you were one of the few Republicans in Congress who understood what needed to be done.  You demonstrated it by co-sponsoring the Immigration Reform law in 2006 with Senator Ted Kennedy.

As a Hispanic, I respect and honor your contributions to this country.  My own father fought in the Pacific in World War II.  He was a veteran who went through hell.  He spoke to me about it often.  So I believe I understand what you went through.

There are many Americans who don’t understand the deep connection that unites the people of the Americas, for instance, the deep bond between the people of Mexico and the United States.

My Hispanic heritage through my mother is not Mexican.  But as a result of this heritage, I’ve learned that we have to fight to unify the Americas.  We’re one continent.  We depend on each other.

John McCain, I still have a profound respect for you.  Please reconsider your position.  We need you. And we love you.