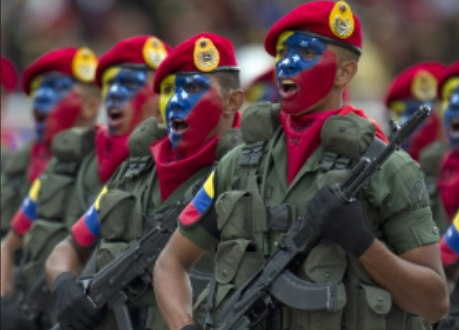 Earlier this week multiple news outlets reported that Venezuelan President Nicolas Maduro is threatening the U.S. with war. Upset by President Trump’s ban disallowing Venezuelan officials from entering the country, Maduro reportedly stated, “We have been shamelessly threatened by the most criminal empire that ever existed and we have the obligation to prepare ourselves to guarantee peace,” said Maduro, who wore a green uniform and a military hat as he spoke with his army top brass during a military exercise involving tanks and missiles. “We need to have rifles, missiles and well-oiled tanks at the ready….to defend every inch of the territory if need be.”

Not only must we, as Americans, think about an appropriate response to Maduro’s threat, but we must also question the bigger picture. Where did Venezuela get their missiles? We know that Russia supplied them with such weapons in 2010. Iran and Venezuela – both oil countries – are strategic allies. In fact, in 2015, Maduro and Rouhani (the Iranian leader) agreed that falling oil prices resulted from increased fracking in the United States, as well as their “common enemies” using oil prices as a “political ploy.” Rouhani affirmed that Iran and Venezuela would join forces to “thwart world powers’ strategies and to stabilize prices at a reasonable level.”

Are there any other countries that are supplying Venezuela or posturing Venezuela to provoke or attack the U.S.? China is deeply invested in Venezuela. Several years ago, North Korea also allied themselves with Venezuela. In June of 2014, the PanAm Post reported that North Korea authorized their embassy in Venezuela to be reopened. The article stated, “[North Korea’s] admiration for Hugo Chávez’s 21st Century Socialism has catalyzed a deeper interest in the Chavista regime.” The embassy was reopened following a visit to Venezuela by the North Korean Ambassador to Cuba, Jon Yong Jin. “This appearance in Venezuela was telling, given North Korea’s limited number of diplomatic missions.” Yong Jin also expressed his support for President Nicolás Maduro.

The PanAm Post article continues, “Earlier that month, Maduro declared three U.S. diplomats persona non grata, for allegedly conspiring to overthrow him, a decision that received clear support from Kim’s regime. Yong Jin congratulated the Venezuelan president for taking this action, and rejected “the interventionist policy being conducted by the U.S. through its embassies.”

In light of this knowledge, it makes sense to further investigate the relationship between Venezuela and North Korea, since both of these nations present the threat of war to the U.S. We urge our leaders to craft the U.S. response to these nations with care, understanding that they and other nations may be united in their opposition or in military action against us.

We also ask our leaders to grant immediate protections to Venezuelans who are able to leave their country. They need Temporary Protected Status so that they can leave a dangerous regime. Venezuela has become a violent and murderous place where the population is starving. We absolutely must help the Venezuelan people who are suffering due to Maduro’s leadership.

Thank you for joining us in raising your voices in asking our leaders to address these issues with wisdom and compassion.