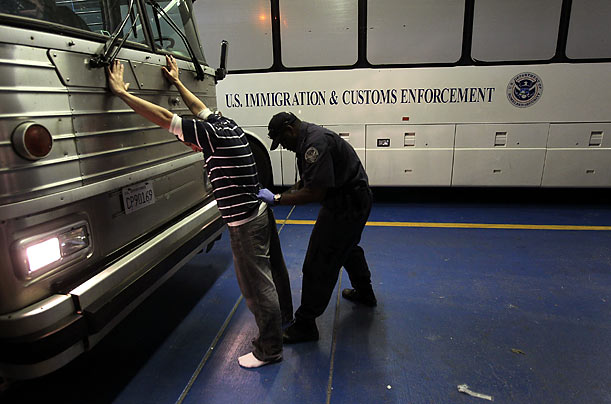 Imagine: Life in your home country is so dangerous or hopeless that you journey a thousand miles with nothing but your savings, a change of clothes, a cell phone and a list of family phone numbers. You know there is a legal procedure for getting into this promised land, but your life is at stake so you risk everything to get in immediately. You arrive at the border, full of hope for a better life.

As soon as you step across the line, someone tackles you, speaking a language you don’t understand. Soon, you are at a detention center. Someone takes all of your possessions – even the list of phone numbers – away from you..

A couple of months later, you are released and told to go home. No one returns your money or your things. What do you do? How do you get home? How do you even ask your loved ones for help or let them know where you are?

Unfortunately, this problem is incredibly common. The numbers are shocking. The Migrant Border Crossing Study (MBCS) found that 53 percent of detainees who were held for one week or longer had possessions taken and not returned.

A new report, Deported with No Possessions: The Mishandling of Migrants’ Personal Belongings by CBP and ICE, by Drs. Walter Ewing and Guillermo Cantor detail the problems surrounding migrant detainees’ property. Two common issues with such property includes theft (by staff and security guards of detention centers) and loss that occurs when confiscated property isn’t properly catalogued or stored. Drs. Cantor and Ewing state, “Aside from the loss or theft of belongings, another way in which dispossession occurs is through the return of money to a detainee in a form that is effectively unusable. No More Deaths found that 64 percent of the money-recovery cases it handled involved the return of money by checks or money orders that could not be cashed in Mexico. Another 12 percent involved money returned in the form of prepaid debit cards. However, activation of a debit card requires calling an 800 number that cannot be dialed outside of the United States. Even if migrants manage to activate their cards, many experience confusion with PIN numbers, for example, and cannot access customer service without entering a Social Security number, which most do not have.

However, these policy changes have not yet accomplished any improvements. As data from the Binational Defense and Advocacy Program (in Spanish, Programa de Defensa e Incidencia Binacional, or PDIB) Documentation Survey with Repatriated Migrants illustrate, detainees from Mexico are still just as likely to have their property retained and not returned as they were before DHS implemented the new policies.

Specifically, before TEDS went into effect in October 2015, 41.5 percent of respondents whose belongings had been retained upon detention reported that not all of their belongings were returned. After TEDS, this proportion was almost identical at 41 percent.

Finally, the data spotlights the all-too-common loss of critical belongings such as cash, identification cards, cell phones, and clothing. Loss of these items can leave newly deported migrants stranded in unfamiliar and possibly dangerous cities with no means of buying a bus ticket home, calling for help, securing government services, or staying warm in frigid temperatures.

It’s easy to understand that the consequences to detainees of not having their belongings returned to them can be serious and potentially deadly. For instance, the MBCS found that 70 percent of deported migrants had traveled to the United States with Mexican identification documents. Of those, 26 percent reported that they had their documents taken and not returned prior to deportation. This is arguably the most important possession one could lose. Extortion and harassment by Mexican officials have been linked to lack of identification. Moreover, it is not possible to receive a wire transfer, obtain certain jobs, board an airplane, or access some state services without identification. Losing money can be nearly as dire. No More Deaths found that, as a result of being deported without access to their money, 81 percent of deportees reported that they could not afford to travel home, 77 percent could not afford food, 69 percent could not afford shelter, and 53 percent were exposed to some sort of danger.

Accounts by migrants returned to Mexico within the past 12 months illustrate some of the many ways in which the retention of belongings by U.S. government authorities occurs. It also shows the practical and emotional implications that the taking of belongings has on these individuals’ lives.

When I was caught by “la migra,” [immigration officer] they threw away my clothes, my wallet, my cap, and my belt. They put away my voter ID, my money, my cell with its battery. When they created a list of my belongings, the agent did not put in the amount of money that I had with me, which was 12,440 pesos. He wrote less than that, half of that amount, 6,449. I asked him to correct it and he only crossed out the amount and wrote the correct amount with his pen. I asked him to print the receipt again so that I wouldn’t have problems later on, but he told me it was not necessary. Now I was deported with nothing. I don’t think they will ever return all the money I had with me.

They did not return to me 4,095 pesos or my cell phone. I am desperate because I don’t have enough for the bus. I don’t know this city, I can’t stay here.

I had 500 pesos and 4 dollars with me. They put the dollars in the commissary but they told me they could not return my pesos to me, that they would stay there. They did not explain to me why. They did not return my cell phone to me either, or my engagement ring. I feel really bad that I was sent back without my stuff.

They made me throw away my notebook with all my phone numbers. They kept the rest of my stuff, but I needed that notebook to talk with my family; my stuff is not as important to me as my family is. I have my husband and three (U.S.) citizen daughters; the oldest is 12, I have one who is eight, and the youngest one is three. How do I let them know that I was sent back here?

I had 2,041 pesos and my birth certificate. They didn’t return them to me. They told me I had 30 days to claim my things but they did not tell me how to do that.

They did not return 500 pesos (of the money I had with me). They left them in migration, where I was detained. They also kept my cell phone, a camera, and a sheet with my phone numbers. They told me I had 30 days to request them, that I had to talk to the Mexican consulate. I called the consulate and they told me they would send my stuff to the capital where I live and I have not filed the request because I live in Santiago Juxtlahuaca, Oaxaca, and the capital is eight hours from my town. I am resigned that my stuff is lost.

I had with me 1,080 pesos. They put it in an envelope, wrote my name on a sheet of paper, and allowed me to keep them. When I arrived at Sierra Blanca the guard took it from me. He said he was doing that for my safety. I asked for a receipt, but he told me “we will give it to you right now.” Then they put me in a room for several hours and never gave me the receipt. Before leaving that place I asked for my money and they told me they could not give it to me because I did not have the receipt. They told me that if I wanted I could stay to claim it. But I did not want to stay; what I wanted was to come back to my country.

A Hispanic agent threw my stuff away, including the money I had, and he laughed. He told me that everything needed to be thrown away, including money, everything that was from Mexico because there all of that was useless. I am very sad because here in Mexico it is extremely costly to get a cell phone or buy clothes.

I had 1,270 pesos, my voter ID, and two cell phones and they did not return them to me. They told me to speak to the consulate if I wanted to recover them. I feel bad because my wife and kids don’t have enough to eat and I will not be able to recover my money or work without my ID.

I had 1,000 pesos with me. They told me they were going to throw them away, but I saw that they left it on a table.

Interviewer: Didn’t they put the money in a protection bag?

No, in the bag they only put my passport, not the money, because they are not stupid.

They started to take my things. They put some of them in a bag and gave me a receipt. But they threw away my sweater and scarf. Because it was too cold I asked them if I could at least keep my scarf and they told me no because I could commit suicide. Then I saw when the cleaning ladies took the trash can with them and I heard when one of them told the other one: ‘this is for you’ and it was my sweater. And I was freezing. It’s very upsetting to be robbed/ have things stolen.

They told me I had 30 days to request my stuff back. Otherwise, they would throw them away. Or that it would be even better if I threw them away myself, so I did threw them away. Because I would be locked in so who would go for them? So I went ahead and threw them in the trash can so that no one would keep them.

As immigration activists, we must raise our voices to demand that migrants receive fair, just treatment, even when deportation is in order. We must work together to protect basic human rights, for all people, in all circumstances.
If you need the advice of an immigration attorney, please schedule your consultation today. With over 40 years of experience as immigration specialists, our highly trained team is here with the help you need.