Every reputable immigration lawyer in the United States should be up in arms that Congress has not brought back section 245(i) of the Immigration and Nationality Act.

Section 245(i) sunset on April 30, 2001, even though it has proven to be an important provision of U.S. Immigration law in preserving the unity of the family. 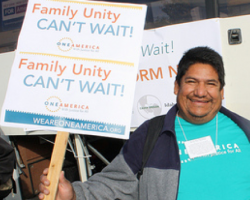 Section 245(i) allows eligible aliens on the verge of getting their green cards (lawful permanent residence) through a petition filed by a qualified family member (U.S. citizen or lawful permanent resident), to get their cards in the United States without traveling abroad to their home countries. Those who apply under section 245(i) are screened by the government for any criminal history, health impediments and any other grounds of inadmissibility. They also have to pay a fine of $1,000.00 for entering illegally to the United States in addition to other processing fees.

In spite of the importance of section 245(i) in protecting the unity of the family by making sure that the alien stays in the United States, many members of Congress have bought the argument that section 245(i) is an “amnesty” as proposed by several anti-amnesty organizations.

According to these organizations, an “amnesty” forgives the alien who commits an illegal act or crime, including the act of entering the United States illegally.

What these organizations don’t mention, perhaps because they haven’t read the U.S. Immigration and Nationality Act, is that there are many waivers, ie, forgiveness provisions, in the interest of family unity in the Act.  A legally-trained person in immigration law is aware that an alien who commits certain crimes can still be “forgiven” under certain circumstances in the interest of protecting family unity. What is important in these cases is the family the alien supports, morally and economically, while balancing the seriousness of his/her criminal behavior.  If s/he is guilty of a serious crime, he will not be given a green card.

These anti-amnesty organizations don’t take into account the fact that by allowing aliens to get their green cards inside the United States, the security of our homeland improves because we will have a record of these aliens.

Another advantage is that such aliens will stay home and support their families.

Members of the American Immigration Lawyers Association, and other reputable immigration lawyers, should be up in arms that no one in Washington, D.C. has taken a good, hard look at the benefits of section 245(i).  It is time to stop the misinformation campaign and start educating everyone on Capitol Hill about this vital provision of U.S. immigration law.