The Dream Act is a central part of the comprehensive immigration reform legislation proposed by Luis Gutierrez (D-Illinois).  The Act would award legal status to undocumented immigrant children who fall under certain criteria.  Among these criteria, they must have entered the U.S. before the age of 16, have lived here for five years, graduated from high school or received a GED, and either gone to college or enlisted in the military for two years.  According to the American Immigration Lawyers Association (AILA), the Act is “a humane, rational solution to a bedeviling problem: a generation of undocumented kids who are coming of age without any prospects to advance their lot in life.” 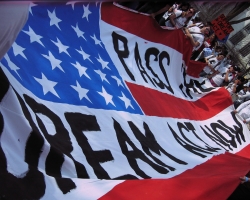 The Dream Act will be good for the U.S. economy because these kids can be guided into occupations that are in high demand today, such as nursing and teaching.  According to the Bureau of Labor Statistics, each occupation will experience a 30% and 32% job growth, respectively, until 2014. The demand for these workers is growing while experiencing a shortfall of U.S. workers. As this gap widens, so is the disconnect between policymakers and our national economic-demographic reality.

Our current immigration system offers no practical channels to fill the growing vaccuum of U.S. workers unless something like the Dream Act is passed by Congress.

The Dream Act is not “the” solution but it’s certainly a step in the right direction.  Opponents to this kind of immigration reform should consider the fact that we, as a nation, have more to gain by being generous to these kids.

So as we begin to seriously consider how we can use foreign workers in the best interest of our ageing population, our policymakers should also create a realistic program for foreign temporary, non-seasonal, workers. Safeguards to protect the native-born labor force should be relaxed in view that there’s a shrinking labor market and current protections in the H-2B program for seasonal workers are consumed with red tape. Red tape obstructs our goal to get legal workers for these occupations, have them pay taxes, while strengthening the economy.

Approving the Dream Act is a win-win situation.  These undocumented immigrant children are some of the brightest. We should take advantage of their presence. The vast majority were brought here unwittingly, maybe unnecessarily, but they’re here.  Maybe this is God’s way of helping us too.