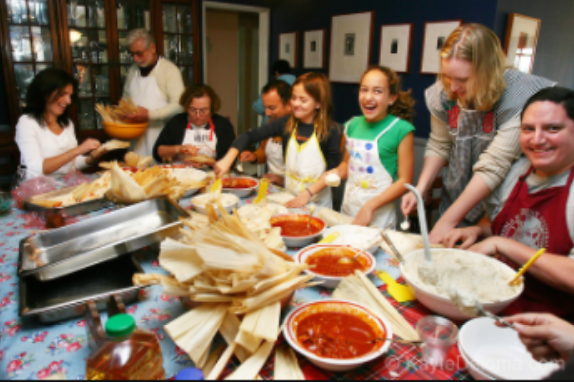 Tamale-making as a unifying activity

The spread of tamales as an important, popular food throughout North and South America bears witness to the connection shared by the people of the Americas. The tamale is a culinary testament to the fact that we have been moving across borders and sharing recipes or hundreds, and in some parts, thousands of years. This Mesoamerican dish made of masa or dough (usually corn-based) wrapped in corn husks or banana leaves and filled with cheeses, meats, fruits, vegetables, and chilies is estimated to have been created as early as 8000 – 5000 BC.

Though there are regional differences in name and ingredients, this dish remains recognizable. In Venezuela, for example, tamales are known as hallacas and are filled with a mix of meat, olives, almonds, and raisins. In North America, Cherokee tamales are known as bean bread or “broadswords” and are made with hominy and beans wrapped in corn or tree leaves. In the Mississippi Delta, African Americans developed a spicy cornmeal version called “hot tamales” that became associated with blues music. In fact, hot tamales are the subject of the famous 1937 song, “They’re Red Hot” by blues crooner Robert Johnson. Tamales are eaten all over the Americas, including the United States and Mexico, all of the countries of Central America, many countries of South America from Colombia down to Argentina, and Caribbean countries including Cuba, the Dominican Republic, Trinidad and Tobago, Curacao, Bonaire, and Aruba (where they are called “ayakas”).

Tamales have a rich and storied past; they have served as more than an important source of nourishment for the people of the Americas. In a sense, they symbolize unity. Gifts of food were (and still are) the foundation of human interrelations. In pre-Columbian Aztec societies, mothers solidified family bonds by spending hours preparing tamales for her husband and children. Because it is a labor intensive process, tamales were often prepared communally, with neighbors, friends, and extended relations coming together to prepare tamales for their families.

Tamales were considered sacred to the Aztecs, Olmecs, Toltecs, and Maya. They were offered to imperial rulers and to the gods to ensure health and a good harvest. The Aztecs offered bean tamales to the jaguar deity, Texcatlicpoca, and shrimp tamales to Huehueteotl, the Lord of Fire.

Today, gifts of food still unify and strengthen our relationships. The family dinner table is the place we come together after a day of being separated by school and work schedules. The restaurant table is a place we come together to see our friends, to celebrate victories like graduations and anniversaries, to ignite or rekindle romance, and to initiate business deals. Finally, the gift of food pacifies and unites leaders of nations, with luxurious, formal state dinners serving to smooth diplomatic relations across borders.

border wall, how to get a visa, immigration, mesoamerican food, tamales, trump

Why You Must Act Now if Your Immigration Status is in Question
Tamales for Trump Part 2: The Economic Case for Unity with Neighbors