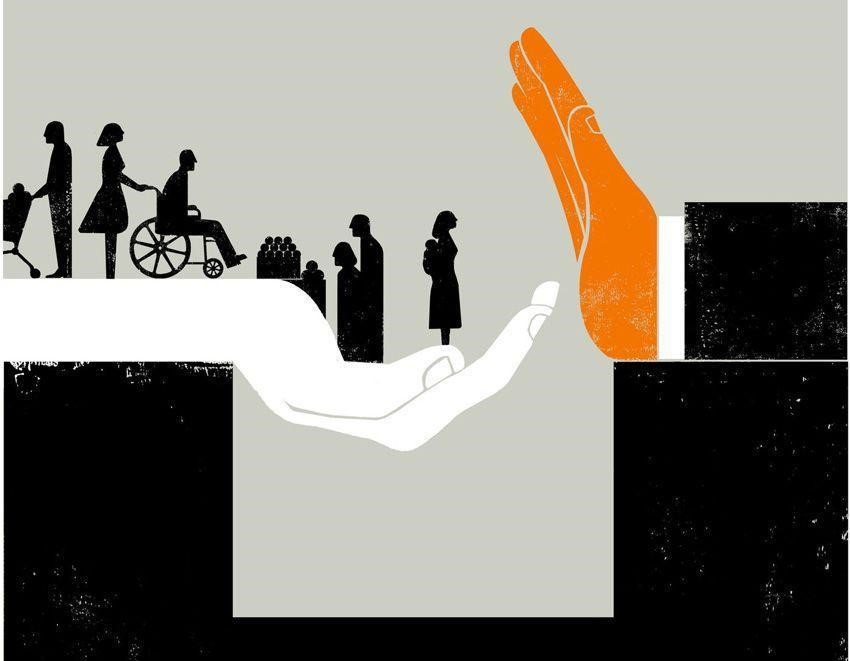 With the administration’s announcement of the public charge on immigration rule, our current leadership has struck the match and readied the dynamite that may finally explode the illusion of goodwill between the classes. This rule states that legal immigrants who have needed to use public assistance programs like Medicaid, the Supplemental Nutrition Assistance Program [SNAP food stamps], Section 8 housing vouchers and assistance, and public housing in the past or who may possibly need them at some point in the future may not quality for green cards allowing legal residency in the United States. A family of four who makes less than $64,000 a year may be denied green cards based on the public charge rule. Essentially, this rule declares that people who have or may someday belong to lower socioeconomic classes aren’t worthy of living in this country.

This rule is unfair and unAmerican for so many reasons. First, many people from less developed nations may be perfectly capable of earning a good living here but haven’t had opportunities to prove their economic potential because of circumstances in their home countries. These people may never have a chance to climb the economic ladder that would allow their children to be healthy, productive individuals because there is now a high price of admission to get into this country.

Second, not only is such a rule damaging for immigrants who desperately need refuge in our country, but it’s bad for Americans, as well. How many employers can’t afford to pay employees anything but minimum wage? Minimum wage work does not add up to over 250% of the federal poverty line, one of the financial criteria listed in the public charge rule. Mark Krikorian, the executive director of the Center for Immigration Studies, has pointed out that President Trump himself has stated that he wants to let in more immigrants to fill certain positions, such as temporary jobs in landscaping and housekeeping. However, the public charge rule would likely prevent economic sectors that have traditionally relied on minimum wage migrant workers, such as agriculture and some domestic work, from being able to hire the workers they need to fill such jobs. While I would argue that such employees should be paid more than minimum wage in the first place, this ideal is not always as easy to achieve as we would like it to be. To be a self-sufficient nation, we need to be able to produce as much of our own food as we can, avoiding overreliance on food supplies from other nations. The public charge rule may serve as a major obstacle to our farmers and other employers that need the help of migrant workers, leading the United States to be too dependent on foreign nations for our survival.

Third, this rule magnifies the social stigma that Americans have long felt when using public assistance. While it is not ideal for anyone to have to use public benefits and certainly not OK for anyone to take advantage of the system, such benefits are sometimes necessary to keep individuals healthy, allowing them to be productive and to get back on their feet in times of crisis. Additionally, public benefits like health insurance can actually save American taxpayers money in the long-run. When people have access to health insurance programs like Medicaid, they are more likely to get regular check-ups and go to the doctor at the first signs of health problems. When they don’t have health insurance, they are more likely to wait until a health problem has progressed into more severe, more expensive, and more difficult-to-treat territory. Experts say uninsured people can have an effect on society in a number of ways. These effects include an increase in your insurance premiums and how much a hospital stay will cost you. The public charge rule discourages all people – immigrants and American-born alike – from using public benefits. Because use of benefits leads to major repercussions for immigrants, all people are likely to suspect that utilizing public assistance programs may someday lead to negative consequences. As reported by Fox News’ Charles Creitz, “Numerous studies, by Migration Policy Institute and others, have found the rule would result in disenrollment from public benefits programs by many immigrants, including those not directly affected by the rule, as well as U.S.-born dependents. Already, there are anecdotal reports by service providers of people disenrolling from public benefit programs amid fear or confusion about the rule.”

For as long as most of us can remember, we have been taught to believe in the American melting pot mythology. According to this story, our nation is a place for all people: regardless of religion, skin color, or bank account, we all belong here. When I was young, the melting pot story was a source of pride and a rationale for American patriotism. Over the course of our nation’s history, we have suffered challenges and made plenty of mistakes. For instance, our forefathers had good ideas about freedom and power for everyone while also upholding damaging anti-freedom ideas about slavery and misogyny. But as the melting pot nation, we worked to fix those problems. We ushered in a Civil Rights era. While the struggle for empowerment across class, race, and gender divides has never ceased, it seemed we were continuing to make forward progress. Until recently. Today, Trump’s public charge rule has added fuel to the classism flames. Without question, we have turned back on our path of progress. Instead of empowering all American residents to live and work together in peace, our leadership has decided to turn our nation into a country club for select classes, while those who can’t afford the price of admission are cast out of the country altogether or are denied the hope of seeking help when in dire straits. “This rule is the administration’s attempt to unilaterally implement a broad immigration reform. It will likely shift immigration away from Latin America and towards Europe, while disproportionately disadvantaging women, children, and the elderly,” said Sarah Pierce, an analyst at the Migration Policy Institute. In other words, this rule will likely lead to the exclusion of people along dividing lines of class, race, age, and gender.

The public charge rule goes against American mythology. Favoring certain socioeconomic classes and races, it’s anti-melting pot. Working under the assumption that a person who has been impoverished in the past will be impoverished in the future, this rule is also anti-American Dream. A fundamental American idea is that we can climb the socioeconomic ladder, no matter who our parents are or how much money we have now. The public charge rule makes the opposite assumption. It’s a pessimistic declaration that those who have come from little wealth and power will never rise up. Implied in the public charge rule is a condemnation of our whole system and American ideology.

Fortunately, protests against the public charge rule are ringing loudly around the nation. An editorial in the Dallas Morning News stated that Trump’s public charge rule diminishes the American spirit and called it “a firebomb in a hay barn.” California, Maine, Oregon, the District of Columbia, and Pennsylvania have filed a joint lawsuit in U.S. district court to stop the enactment of the public charge rule. Please join us in adding your voice to the chorus of public protesters. It’s time to call our Congressional representatives and make our voices heard in the streets.

If you have any questions about the public charge rule or any other immigration issues, please contact our office. Our expert staff is here to help you navigate our overly complex immigration system.