By Kimbriel Dean on August 16, 2019 in Blog, Uncategorized 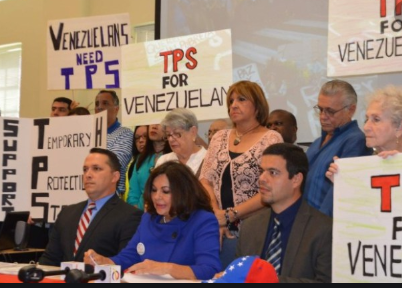 For years now, Venezuelans have been clinging to survival while their corrupt leaders have pushed them ever closer to the edge. Venezuela’s leaders have feasted on the nation’s resources and squandered the rest while the average citizen has lost access to food staples, medicine, and toilet paper among other daily necessities. Some have died; others are starving. Will we finally stand up and do something to protect the suffering and the dying?

Our government has taken action against Nicolas Maduro and his cronies who have sunk Venezuela into its current hole. The White House does not officially recognize Nicolas Maduro as Venezuela’s president, even though he continues to control their government. Instead, we (along with 50 other nations) recognize opposition leader Juan Guaidó as the legitimate president of Venezuela. Additionally, we have imposed economic sanctions on Venezuela in an effort to smoke Maduro out of power. Just last week, President Trump upped the ante on such sanctions. Through executive order, the administration froze Venezuela’s assets in the United States, banned entry to Venezuelan citizens aiding the dictator, and pledged to sanction foreign companies and governments that conduct business with Maduro’s government. While these harsh sanctions are likely to bulldoze Maduro out of Venezuela, they will probably also make life even more miserable and dangerous for the ordinary Venezuelan. Our sanctions may help rid Venezuela of its corruption problem over the long-term, but in the short-term, they have the Venezuelan people in a stranglehold and threaten to worsen their humanitarian crisis. That’s why we bear some responsibility to protect Venezuelans when we can, including those who have already taken refuge in the United States.

Recent political moves in the United States reveal that both the White House and many of our Congressional representatives are ready to help the Venezuelan people who have sought shelter in the U.S. from the political storm at home. In a bipartisan vote, the House of Representatives passed a bill that would protect thousands of Venezuelans who currently live in the United States from deportation by offering them temporary protected status (TPS). In fact, the Congressional Budget Office estimates that 200,000 Venezuelans currently living in the United States would be eligible to receive TPS. This bill would allow Venezuelan nationals to stay in the U.S. temporarily and receive work permits valid for 18 months if they remain continuously present in the U.S. following the bill’s enactment. Sadly, this bill has stalled in the Senate. Senators who support the bill are holding out hope that the Senate will take up the bill again when they reconvene this September, following the Congressional summer recess.

However, the White House has been working on its own separate plan to protect Venezuelans in the United States from being deported. Florida Senator Marco Rubio reported last week that he has been working with the White House on a measure that would provide Venezuelans with “deferred enforced departure” status instead of TPS. Deferred enforced departure status is another way to say that individuals from other countries have permission to stay in the U.S. for a limited amount of time and can, potentially, include work permits.

We applaud those leaders in Congress and the White House who recognize the need to protect Venezuelans and citizens of other countries who face persecution and threats to their survival. With our recently-tightened sanctions on Venezuela, we know the situation’s only going to get more desperate for the Venezuelan people. That’s why we must act to protect everyone we can from the effects of Maduro’s detonation of Venezuela’s economic and political structures. We can’t sit idly by while innocent people suffer. Please join us in asking our leaders to help the Venezuelan people.

If you have any questions about TPS for Venezuelans or other questions about immigration, please contact our office. Our expert staff has over forty years of experience in immigration law. We are here to help you and your family members as you seek to find your place in this country.