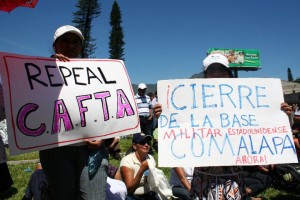 10 years have passed since the passage of the Central America Free Trade Agreement (CAFTA-DR), an expansion of NAFTA to five Central American nations (Guatemala, El Salvador, Honduras, Costa Rica and Nicaragua), and the Dominican Republic. While CAFTA was intended to spur economic growth for all parties by eliminating certain tariffs on exports between CAFTA countries, this trade agreement has primarily benefited U.S. trade and agribusiness while it has pushed small and medium-scale Central American farmers further into poverty.

Of course, we should have known that CAFTA would not benefit the people of Central America. Prior to passage, an estimated 1.5 million Mexican campesino farmers had lost their livelihoods under NAFTA’s agricultural terms, on which CAFTA’s agricultural provisions are based.

How CAFTA-DR Has Benefited U.S. Trade and Agribusiness

Undeniably, CAFTA has revitalized trade in the U.S., which has grown from an average of 5 percent in the 1990s to 13.9 percent after the agreement. CAFTA-DR has also positively impacted agriculture in the U.S., increasing its exports to the region by 84 percent from 2005 to 2011, which represented $4.2 billion USD in 2010. For the United States, removing agricultural barriers to this market has thus created a beneficial solution to its overproduction of farming goods.

How CAFTA-DR Has Hurt Central American Farmers and Consumers

According to an article by the Council on Hemispheric Affairs: while free trade advocates had argued that CAFTA-DR would decrease poverty in rural areas and accelerate the development of Central America, substantially benefiting consumers by decreasing prices of consumer products and improving their purchasing power, this has not happened.

Years after its implementation, CAFTA-DR has re-structured Central American countries’ economies by flooding their markets with subsidized grains coming from the Unites States. Essentially, U.S. taxes are used to help pay American farmers’ production costs, giving U.S. agricultural products a big advantage. In fact, between 1995 and 2011, the U.S. government spent $277.3 billion USD in agricultural subsidies. Many of these products were exported to Central America.

Since the free trade agreement, Central American countries and the Dominican Republic have been transformed into net food importers, with their governments unable to dedicate as much investment to the agricultural sector compared to the U.S.

As a result, the region has dramatically increased its dependency on imports of cheaper food products. Yet, low food prices in Central America have not effectively mitigated hunger. Plus, such dependence on imports exposes the region to volatility of food prices. What happens if U.S. food imports skyrocket?

According to the 2008 State of the Region Report, “An increase of 15 percent in the price of food could mean 2.5 million more people in extreme poverty, particularly in Guatemala and Honduras.” The report shows “a model of rising imports (wheat, rice and corn went up to about 30 percent in available food between 1990-2003) with tripled prices for wheat and doubled prices for corn and rice (2008-2009),” which not only “leads to profits for the companies that import the goods, but growing malnutrition, especially among the region’s rural and indigenous poor.”

Through trade agreements such as NAFTA and CAFTA, Monsanto and big agribusiness have flooded Mexican and Central American countries with imported food and overloaded their water systems, land and community with chemicals.

Subsistence farmers and impoverished people in Central America bear the brunt of CAFTA’s negative impacts. Increasing food insecurity in these nations only increases motivation for stressed and malnourished Central Americans to migrate – legally or illegally – to the United States.

We must not ignore issues of social injustice and food insecurity caused by trade agreements such as CAFTA. We must craft trade agreements that benefit people at the bottom as well as the top of the economic ladder. We must seek to correct such imbalances because they spark immigration out of desperation.

When we fail to do so, we simply create more problems. While CAFTA may have benefited the U.S. economy in some ways, it has hurt us in others. For example, border security, immigrant detention facilities, prosecution and deportation cost the U.S. billions each year. Undocumented immigrant children are flooding the border right now. If CAFTA and NAFTA had positively impacted the Mexican and Central American people at the bottom of the economic ladder, perhaps parents would not be desperate enough to send their children – alone – to the U.S. border.

What do you think of CAFTA? Please tell us in the comments section below.

If you need the help of an immigration attorney, please contact us today to schedule an appointment.

(see CAFTA Article 2 on coyotelegal.com for a continuation of this topic)